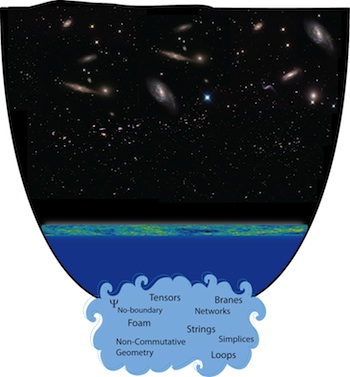 We discuss the sensitivity of predictions for primordial cosmic inhomogeneities to physics taking place prior to the inflationary era, and emphasize the importance of ‘Non-Gaussianity’ to observationally probe that regime. We then consider the pre-inflationary scenario provided by loop quantum cosmology, and study its consequences both at the conceptual and phenomenological level.

“A quantum gravity extension of the inflationary scenario” (slides)

Since the standard cosmological perturbation theory is based on QFT on curved space-times, it is not applicable in the Planck era. Using techniques from loop quantum gravity, the theory is extended to overcome this limitation. The new framework sharpens conceptual issues by distinguishing between true and apparent trans-Planckian difficulties
and shows that the true difficulties can be generically overcome in the standard inflationary scenario. The phenomenological implications will be discussed in Ivan Agullo’s talk.

Cosmological models in loop quantum gravity provide non-singular early-universe scenarios. However, consistent gauge-invariant implementations of perturbative inhomogeneity have shown that there is no temporal mechanism of singularity avoidance, such as a bounce, but rather signature change at high density. This talk reviews the underlying constructions in loop quantum gravity, including effective equations and consistent off-shell constraint algebras, as well as implications for structure formation and falsifiability of the theory.

We place observational constraints on LQC and Wheeler-DeWitt quantum corrections from the inflationary spectra. While the latter are typically negligible, in the former case quantum effects can be large in certain regions of parameter space.

“Is the Wheeler de Witt Equation the way to quantum cosmology?” (slides)

Is there good reason to expect that the early universe will obey the Wheeler de Witt equation [1,2] (and that equation alone)? Problematic issues arising as regards this proposal are,

(a) technical problems to do with its formulation [3];

(b) whether it can be correct in view of the problem of time it leads to; a comoving proper time ADM formulation avoids this problem [4], as does a unimodular approach to gravity [5];

(c) the fact there seems to be no prospect of testing it in any context whatever (so it is a major untested extrapolation from known and tested physics);

(d) in its usual form it is not based in discrete foundations, as one might expect should be the case for any viable theory of quantum gravity, thereby avoiding infinities that are almost certainly unphysical (the proposals [6,7] have not caught on); other approaches have considered effects of spacetime discreteness on cosmology;

(f) if the idea does make sense, with the WdeW equation the only dynamics in operation, then no wave function reduction to eigenstates takes place, so no classical universe emerges.

The latter point is particularly problematic as regards the claimed emergence of classical perturbations from an early universe quantum state, that later lead to the existence of large scale structure in the universe and hence testable cosmological predictions. This does not make sense without a mechanism whereby classical outcomes emerge.

[8] G F. R. Ellis “On the limits of quantum theory: contextuality and the quantum-classical cut”

“What can cyclic universes explain?” (slides)

I will contrast inflationary and cyclic universes by asking: for which features of the universe can these theories provide good explanations?

“Quantum gravity and cosmology: will they ever meet?” (slides)

Judging from past record probably not, and for two orders of reason.
First, the quantum gravity community seems obsessed with its mathematical navel; second, when it does deign to make contact with reality there is a distinctive lack of balls: how could something as crazy as quantum gravity ever connect with something as boring as inflation? I describe a few attempts to improve upon this state of affairs: they amount to a half-way house between the sensible world data and the total madness of non-perturbative quantum gravity.

“Light from the end of the tunnel: observational signatures of open and anisotropic inflation after tunneling” (slides)

If inflation lasted for only the necessary amount of e-foldings to be consistent with current observations, there is a small chance to observe traces of the initial conditions for inflation. Tunneling from a different vacuum offers a well-defined (albeit fine-tuned) scenario for the onset of inflation. In the case of open inflation involving two independent fields for tunneling and inflation, resonance effects produce distinct signals in the perturbation power- and bispectrum that may be detectable in CMB observations. In the more general case where one or several of our current large dimensions where compact in the previous vacuum, residuals of the primordial anisotropy might provide some information about the geometry of our parent vacuum. Unfortunately, this effect is already strongly constrained by the magnitude of the CMB quadrupole.

We show that effective cosmological equations for continuum homogeneous geometries can be derived directly from fundamental group field theory (GFT) models, in full generality. The relevant quantum states are GFT condensates, and a form of nonlinear quantum cosmology arises as the hydrodynamics of the system, in the same way in which Gross-Pitaevskii equations arise from the quantum microscopic dynamics of real Bose condensates. A continuum spacetime emerges then from GFT as a quantum fluid.

In this talk we briefly review the main ideas and concepts of the Asymptotic Safety program and then describe various recent insights into the basic physical mechanism which is responsible for the actual existence of the ultraviolet fixed point in quantum gravity. The discussion is based upon a close analogy with magnetic systems and Yang-Mills theory.

We review the random geometry approach to quantizing gravity, its natural concepts and mathematical tools, and the cosmological scenarios it could favor.

“A scenario for resolving a Big Crunch” (slides)

Thermodynamics and entropy bounds will be used to argue for a scenario incorporating a transition from a big crunch to a big bang. The principle of entropy maximisation will be employed to conclude that the transition should be described as an explosion. The scenario will be discussed in different contexts including a brane universe example.

Old and new topics related to “stringholes”, very massive compact strings sharing many properties with black holes, will be discussed including:
i) the production of stringholes in transplanckian-energy collisions;
ii) the detection of quantum hair in high energy string-stringhole collisions;
iii) a model for the big bang/bounce in terms of a closely packed gas of stringholes.